With the current racial tensions in the United States after the deaths of George Floyd, Breanna Taylor and countless others murdered senselessly – silence in regards to these issues basically meant complicity.  At that point, I didn’t know what to say or how to express my own experiences with racism/micro-aggressions as an Afro-Caribbean woman living in the United States. Especially publicly, because once you open something up publicly, everyone feels as if it’s their personal right to admonish your personal decisions. But here we are…so read on if this interests you. 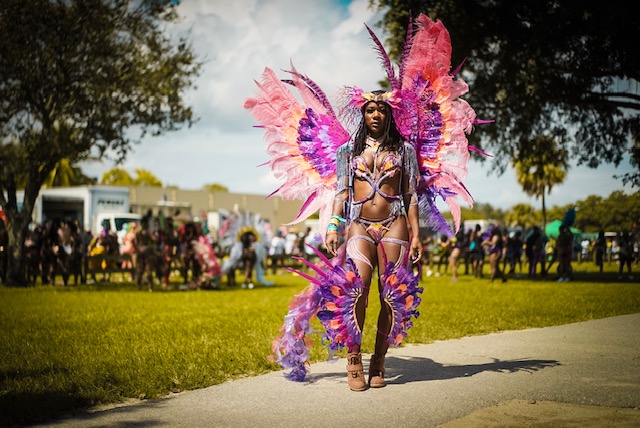 There is this idea that racism only happens in the U.S.; which is far from the truth if we’re being honest. Colorism is a definite form of racism that I’ve seen growing up in the Bahamas and more particularly recently around carnival time in neighboring Caribbean cultures.

I cannot speak on others experiences but I can personally attest to my own. I think when you start off going to carnival you just follow the status quo because you see the excitement, the vibes all the nice pretty shiny things. Its not really until you’re in it that you understand that everything that glitters isn’t necessarily gold.

I remember one year I wanted a costume so badly and it was really the only costume I wanted for carnival that year. A friend of mine had a connect but unfortunately my name couldn’t even go on the registration form for my own costume THAT I WAS PAYING FOR. The connect had to register it in her name and I was responsible for the payments. She even went on and on to the lengths she had to go to keep this registration secret to get me this particular costume.  In the back of my mind, I was definitely kicking myself for being so desperate to “get in” but I knew that I would have a good time because it wasn’t my first T&T carnival.  So as “grateful” as I was-I also felt sick to my stomach with the entire process + I had some carnival virgins with me so I wanted it to be as seamless as possible.

Now before ya’ll start getting all judgmental; I knew I didn’t have to go through the process I did but I did and I learned from it and now here we are…

So carnival came and it was organized that the connect would pick up the costume. The bodywear was nearly perfect but the backpack (as beautiful as it looked) had wire exposed in several places – and I paid my GOOD money. I was livid but also fearful of taking it back to the mas camp due to the fact that my name wasn’t on the registration (which I know now probably wouldn’t have mattered since it was paid for). So I wore it during carnival day which was so crowded to the point persons were asking me to take it off because I was either scratching them or nicking them several times over. So a friend of mine let me take the feathered backpack and drop it off at his family business along the route and towards the end of the night it was like nothing had happened.  While on the road, I did notice that there were maybe a handful of dark skinned girls like me in the costume; most of the girls were lighter skinned and a certain kind of look and that was who the photographers flocked to.

A few days after carnival, someone had offered to purchase the costume and I sold it for maybe 1/4 of its worth and never looked back. I was just completely turned off and more so mad at myself for making the decisions I made. So that was my last experience going that particular “carnival route” for several years because the planning process just became too stressful for me to get into certain bands and fetes to deem the experience worthwhile. Especially when there are other viable choices.

Now does this particular instance mean that the “stress” was rooted in colorism? Maybe yes or no. But as I listened to others about their personal experiences and even tried to register with a private section (who asked for photos upfront before registration) for the following year; it started to add up. Even certain fetes required a social media screening or submitting of photos and without a co-sign from a committee member; I never even got so much as a rejection/response. So I was just completely done.

The one thing I will say is that we are left with a choice after our mistakes. I didn’t right away try to practice otherwise but I just was over the whole “getting in line to fit in”. There were other bands, other fetes and I would have fun just the same. So to me, attempting to access and utilize the same entities that practice colorist business models, marketing etc. was just fruitless to me. It did take me a while to figure this out just FYI; so no judgment.

Carnival is still a beautiful thing; it always will be. A feeling and euphoria that is accessible to all and everyone should experience it.

However, I want to leave with just a thought that if we are certain of the injustices and prejudices in our society, why do we allow ourselves to continue to feed into it. Why not make the choice to support elsewhere? I feel like I’m worthy of a well rounded and satisfying carnival experience that is worth every penny I spend no matter the color of my skin or my lack of connections; don’t you?

Free/Inexpensive Things To Do In Nassau, Bahamas